Steven “Steve” Wagner of Chalfont, passed away on Tuesday, February 2, 2021 at University of Pennsylvania Hospital in Philadelphia due to complications from lung removal surgery. He was 50 years old.

Steve was a graduate of Central Buck West High School, class of 1989. He was proud to play CB West football (lineman) from 87-89, going undefeated all three years. He attended Delaware Valley University from 91-94, majoring in Business Administration/Marketing (Del Val Alumni).

Steve worked as an Independent Promotional Sales/Branding Consultant at Geiger for more than twenty years and was a seven Time Qualifier for Geiger National Sales Conference.

He loved coaching his son’s sports teams with Lenape Valley Football, LV Basketball and LV Baseball. In years past he enjoyed being a volunteer assistant basketball coach with Special Olympics Pennsylvania (North Penn). He also volunteered his time as organization committee member for Lenape Valley Golf outing and fundraising, as well as Lenape Valley Baseball Board Member, Director of Marketing.

Steve was a devoted father and husband. He enjoyed golfing, going on walks and was passionate about Philadelphia sports teams: Eagles, Phillies and Flyers. This past year he loved going fishing with his son and family bicycle excursions. He was a kind and generous man who touched so many lives! He was a great friend to all he encountered and was loved by all he knew. He will be deeply missed.

A memorial event will be planned for a later date when family and friends are able to gather safely to celebrate his life. 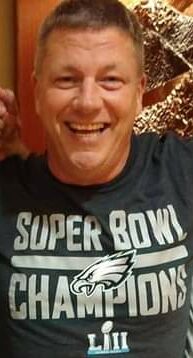