Born in Philadelphia, Patricia was the daughter of the late John and Alida McClenahan.

She graduated from Shipley School in 1948 and began her college education at Bryn Mawr. In 1951, she married Richard. The couple lived in Sewickley and Manhattan before starting their family in northern New Jersey. They later moved to Swarthmore, PA and to Doylestown in 1983.

Patricia was very active in all of these communities. She was particularly passionate about the League of Women Voters and her job as a librarian with the Swarthmore College Peace Collection.

In Doylestown, Patricia served as President of the League of Women Voters and until recently, played a mean game of cards with the Newcomers Bridge Group. They were part of the Pine Run Community for ten years. Summers were spent with her children and grandchildren at the family home on Long Beach Island, NJ.

Interment will be in Woodlawn Cemetery, NY. 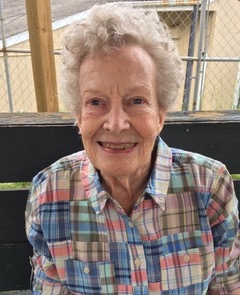