Born in Chester, she was the daughter of the late Margaret Wright and Charles H. S. Hewitt, and the widow of Glenn F. George, to whom she was married for 54 years.

Peg graduated from Prospect Park High School and Ursinus College, where she and Glenn met.

Elected to the Central Bucks School Board in 1969, she eventually became its president. From 1976-1980, she served in the Pennsylvania House of Representatives, the first woman and first Democrat to represent the 143rd district. She was later appointed Legislative Liaison in the Department of Education by Governor Dick Thornburgh. Following her career in politics, she became Community Relations Director for the Hatboro-Horsham School District, where she created an Educational Foundation and built partnerships with local industries and businesses.

A long-time member and lay leader of Salem United Church of Christ, she was also active in community and state organizations including AAUW, League of Women Voters, Big Brothers/Big Sisters, Central Bucks Fair Housing Group, and Doylestown Chamber Music Group. She was a volunteer for the Doylestown Hospital’s Cancer Center, the Doylestown Free Clinic, and the Bucks County Housing Group Doylestown Shelter.

Among the awards Peg received were the Bucks County Women’s History Week Award and the Ursinus College Alumni Award. She published Never Use Your Dim Lights: Not Even in the Fog, about her life in politics, and We Knew We Were at War: Women Remember World War II, as well as two genealogy books.

Peg is survived by her son: Philip George and his daughters: Kelly and Colleen George; son: Barry George and his wife, Heidi George; and daughter: Marjorie George and her husband, Mark Straubel, their daughter, Madeleine Straubel and husband Daniel Hood, and daughter, Miranda Straubel. Peg’s brothers, Charles and George Hewitt, and her daughter-in-law, Mary Lou George, preceded her in death.

In lieu of flowers, memorial contributions in Peg’s name may be made to:  Salem United Church of Christ at the above address; Empower U (a program for teenage girls), c/o Central Bucks Family YMCA, 2500 Lower State Road, Doylestown, PA  18901 (https://4agc.com/donation)  or the George Peace and Justice Endowment Fund, c/o Ursinus College, 601 East Main Street, Collegeville, PA 19426-1000. 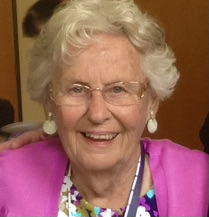