Helen C. VanArtsdalen, formally of Doylestown, died on October 1, 2020 at Community at Rockhill Nursing Home, Sellersville. She was 96 years old and the wife of the late Robert R. VanArtsdalen, who passed in 1992.

Born in Philadelphia she was the daughter of the late Edward A. and Sara A. Radcliff Clayton.

Helen was a homemaker prior to joining the work force. She began her career as a salesclerk, receiving and pricing at the Carriage House clothing store in Doylestown until it’s closing, followed by working at Peddler’s Village in the Shift Shack clothing store until her retirement.

She was member of the Doylestown Presbyterian Church for 74 years and over the years volunteered some of her time to church. She was also a member of Central Bucks Senior Center volunteering making and selling cinnamon buns, as well as helping with preparations for the Holly Fair, pricing and selling.

Helen enjoyed traveling throughout the United States and several European countries with her husband prior to his passing. They took pride in their gardening. With her friends, she enjoyed riding bicycles, dancing, playing cards and bingo.

She was predeceased by her grandson, Bruce Loop, Jr.; her sisters: Marie Smith and Edna Robertson and her brother, Roland Clayton.

Relatives and friends are invited to her grave side service at 10 a.m., Wednesday, October 7, 2020 at Whitemarsh Memorial Park, 1169 Limekiln Pike, Ambler.

In lieu of flowers, memorial contributions in Helen’s name may be made to: American Heart Association at: https://www2.heart.org (donate by phone: 1-800-AHA-USA1) or: Grand View Hospice, 700 Lawn Ave, Sellersville, PA 18960. 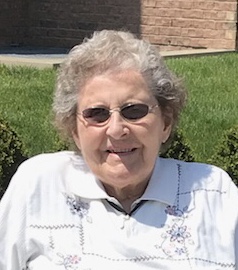