Delwin “Del” L. Bokelman, D.V.M., Ph.D of Doylestown, passed away on March 4, 2017. He was 82 years old, and lived a good and full life dedicated to his family and friends, and the betterment of human and animal health.

A son of the American heartland, Del was born in Linn, Kan. Growing up he called Greenleaf, Kan. his hometown, where he lived with his parents, the late August “Gus” and Gertrude “Gert” (Oestriecht) Bokelman, and brother, Terry Bokelman.

Following his graduation from Greenleaf High School in 1952, he enrolled at Kansas State University, where he was a member of Beta Sigma Psi fraternity. Del completed his Bachelor of Science and Doctor of Veterinary Medicine degrees in 1958 as part of Kansas State’s six-year accelerated baccalaureate/DVM program.

Del married Karen (Carlson) of Ellinwood, Kansas in June of that year, and they moved to the east coast, living in Greenport, New York on the north fork of Long Island, Ithaca, New York and Lansdale, before settling in Doylestown, in 1966, where they raised four children.

Following his graduation from Kansas State, he worked at the Plum Island Animal Disease Laboratory, a US federal research facility off the coast of Long Island, as a Veterinarian, Immunological Investigations. Following his interest in research, he was awarded teaching and study positions as National Institute of Health trainee in Pathology and Instructor of Pathology at the New York State Veterinary College, Department of Pathology, Cornell University. He was awarded a Ph.D. in Pathology at Cornell in 1964.

Shortly thereafter, Del started an eminent, 34 year career at Merck Research Laboratories (MRL) in West Point, Pennsylvania, retiring from there in 1998. During this time he earned a universal reputation as an authority on the safety evaluation of medicinal products. Dr. Bokelman was promoted to Vice President of Safety Assessment in 1989, with duties including other research activities in MRL as well as the Department of Safety Assessment. At the time of his retirement from MRL in 1998, he managed a staff of more than 800 people, and knowing him, he probably knew all their names.

Dr. Bokelman is credited with contributing to the development of over 60 new medicines for human and animal health, and in 1993, was named as the Kansas State University College of Veterinary Medicine’s recipient of the college’s annual Distinguished Alumnus Award. Professional honors for Dr. Bokelman included designations as Fellow, by the American Veterinary Medical Association in 1962 and as Fellow, by the National Institute of Health from 1962-1964.

A 51 year resident of Doylestown, Del helped serve his community with his involvement in Little League sports as a volunteer and Boy Scouts of America as Scoutmaster for the local troop. Learning to sail in the 1970’s he spent countless weekends cruising his sloop, Amazing Grace, on the Chesapeake Bay with his family and friends.

Holding true to his mid-western roots, he was well-versed in the history and lore of the American West. An avid sportsman and conservationist, Del and his wife, Karen, traveled the U.S., as well as Europe, Asia, Australia and Africa exploring the natural world and learning about different cultures. He was also an able chef, a fan of country western music, and an accomplished storyteller, possessing a dry wit.

Relatives and friends are invited to Del’s memorial service, 10:30 a.m., Saturday, March 11 at Reed and Steinbach Funeral Home, 2335 Lower State Rd., Doylestown where the family will receive guests from 9:30 until the time of the service.   Interment will be private. 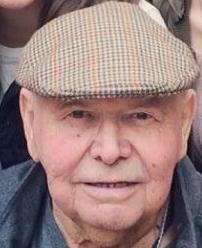